Every so often a group comes along that’s in a class by themselves. Cross Anchored is such a group … one that every pastor and promoter should get to know. From the very first note through to the end of the very last song, our focus remains on worship and though many artists glorify God, it is rare to find three gifted individuals in one group, each with a sincere heart for ministry and the talent and wisdom to go the distance.

Todd Baker, Myron Waddell, and Jay Pass bring a sense of excitement about what they do, a deep conviction of the Spirit’s anointing and God’s calling upon their lives. Their commitment to ministry and their desire to see people drawn closer to the Lord are the driving forces behind all that they do.

Cross Anchored remains steadfast in their conviction that God has ordained them – as individuals and as a group – to a music ministry. They stand apart in the way they seek to use their talent to glorify the Lord but above all, they stand apart in their sincerity and genuine desire to share the Good News with a hurting and needy world. 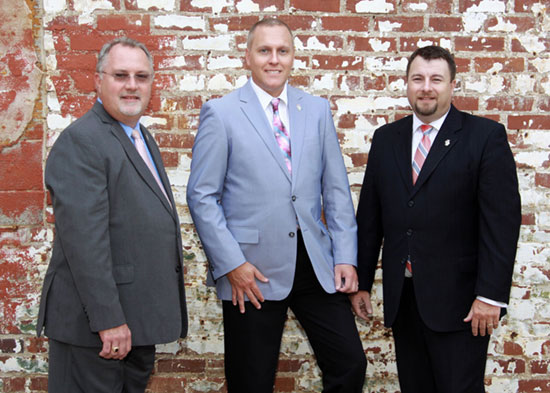 A native of Dobson, NC, Todd began his singing career in 1996 with The King’s Heirs Quartet. After a four year journey with them, he left the group searching for what God would have him to do with his talent. From 2000 until 2005, Todd sang briefly with Crosswork Quartet and had begun a solo ministry. In 2005, Todd joined the group, New Mercy Quartet, and stayed with them until they came off the road in 2006.“Through all of this I still felt like God had something greater for me to do. Everything started falling into place and things have never been the same since! God has great things in store for Cross Anchored as long as we let Him have control.”Todd’s hobbies include golf, playing basketball and spending time with his wife and kids. Todd resides in State Road, NC with his wife, Vanessa, and daughters, Hannah & Sydney Claire.

Born in the little town of Jonesville, NC, Myron began his music career playing drums in elementary & high school. “Saved at the age of nine, there was never a question of where I should be spending my Sundays and Wednesdays. I never sang in high school or college, but after meeting my wife Sherry, I began singing in our home church Fall Creek Baptist Church. The rest (as they say) is history.”After singing a few years with his home church quartet, “Solid Ground”, Myron joined Tarheel State Quartet in April 2002 singing with them until July 2006. “After leaving Tarheel State, I immediately began thinking God was finished with me. Todd and I ate dinner together one night and as we talked, everything became clear … thus the birth of Cross Anchored.Myron’s hobbies include computers and playing basketball. He resides in Elkin, NC with his wife Sherry and children Matthew & Leah.

Born in Olney, Illinois, Jay lived in Vincennes, Indiana until the age of 10. It was then he and his family moved to Gastonia, NC. Jay was saved at the age of 13 at the Wesleyan youth camp in Kernersville, NC. Although he started singing publicly in 10th grade (choir) he made his “BIG” debut at the age of 9 when he sang his first solo in church! Jay joined the Chapel Grove Quartet in 1997 while attending college. Jay enjoys golf, Duke basketball and traveling in his spare time and makes his home in Statesville, NC with his wife Tara and children Carson, Tyler and Kylie.

To save the original high-resolution photo for use in print and digital marketing: Click the image thumbnail to view the full image. Right-click the image. Click “save image as” 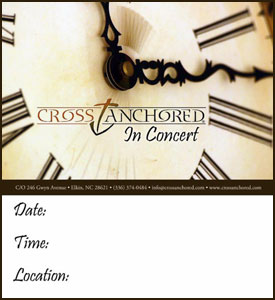 “It is a true blessing to hear a group sing and be amazed at how good they are. That was the case when I first heard Cross Anchored. Since that first night, I have heard them on four occasions and they get better each time. More importantly, they are fine Christian gentlemen.”

“I have been a pastor for 21 years. During that time, I have had many singing groups come to the church. Cross Anchored is by far the group that my church loves. Not only do they have a rich southern gospel sound, but I truly believe that they all know who and what they are singing about. I highly recommend these guys for your church!”